Of Crystals and Sparkle Sparrows 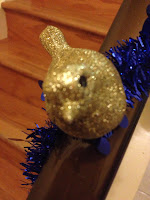 On Friday, after being Pyssla-ed off in the morning, I had time to go to my beloved Dollarama and I bought three of these beauties. Our Sparkle Sparrows (TM)* are perched on our stair bannister, cheering every trip up or down the stairs (apart from when they drive me slightly nuts by falling upside down).

Saturday was rather rainy and miserable but was substantially brightened by a delightful lunch party during which a friend cooked delicious food for us and kept thanking me for letting her use my kitchen. Z1 was rather disappointed that there were not more children at the party and, after entertaining the troops for a bit, retired to her room. This did not prevent our Christmas crafts happening.

This was one I was looking forward to - Borax snowflakes **. I set the apparatus up as you see on the left just before the Zeds went to bed on Saturday evening. Well, I actually  initially had it in a large glass jug that cracked when I poured boiling water into it, spilling boiling water all over the hob (stovetop) which had not yet been tidied up after all the cooking for lunch. Once the jug was disposed of and most of the water mopped up, I tried again with this vase which I warmed with hot tap water before pouring in the boiling water.
The Husband and I kept checking it all evening to see what was happening - nothing much. Sunday morning was to be a lie-in for me but I ended up hopping out of bed not long after the Zeds and Husband as I was too excited to see what had happened with the Borax, water and pipe cleaners. As someone who very rarely gets an uninterrupted night's sleep and looks forward to a lie-in all week, this fact is significant. I was rewarded with the sparkly masterpiece you see here. Magnificent. Z1 immediately decided to do another, this time heart-shaped, so Sunday's craft was sorted instantly and is in process as I type. Once more, I have been checking on it frequently and it's fascinating seeing the crystals appear.

These, despite the lack of instant gratification, were a definite success and require hardly any time or skill to set up. I love them a lot.

Z1 has really taken to the pipe cleaners and she made me a bracelet as
Christmas present (see, it's a Christmas present so it counts as a Christmas craft). This was entirely her own creation - all I did was provide the beads. I am allowed to wear it every day but if I untwist it and the beads spill onto the ground, she WILL NOT make me another. 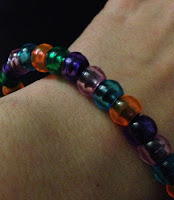 We also put the tree up this weekend. (The Husband kindly went out in the snowy dark to get it for me as he knew how much I wanted to get it today. Aw.) Christmas is coming. The goose is getting fat and it's less than two weeks 'til we depart for Dublin. This gives me butterflies in my tummy.

* not really TM but as named by Z1
** Credit where credit is due: I got this idea, via Pinterest, from Delia  Creates
Posted by Madeleine at 22:01