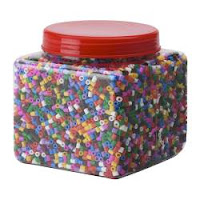 For Z1's 4th birthday we got her these Pyssla beads from IKEA. To be honest, I am not too sure why  - she had done a shape with them in her pre-school the previous year and we were in IKEA a few weeks or days before her birthday and I had decided we should get something for her there so we got these. 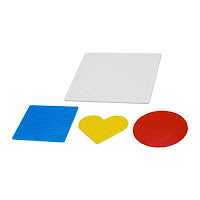 For those of you mercifully unfamiliar with Pyssla, you put these little beads onto the shapes you see to the right (sold separately) which have little spikes to hold the beads. You then iron over it with some greaseproof paper stuff and the beads melt a bit and stick together and you have plastic shape. "Excellent," I hear you cry, "I really need more plastic shapes."


Z1 decided she wanted to do this the day after Pumpkin Day. It's only the second time she has wanted to to them at all and I may have instigated the first time. I wasn't too keen this time - it's fiddly and with the potential for those tiny beads to spill and go everywhere. However, Z2 was asleep (again) and it was cold and wet outside so we hunkered down on the floor in our sitting room and started the fiddly business of Pyssla-ing.

She gave me the circle and I told her I was going to try to do a snowflake. She then decided she wanted the circle so I got the square (we may have lost the heart somewhere). I attempted a snowflake but, decided it was a bit crap so I didn't iron it into a snowflake-attempt to keep and treasure forever. (Apologies, no photos of my snowflake attempt, I didn't realise I was going to blog it)

While I did this, Z1 got next to nothing done. She didn't seem interested and yet wouldn't let me put it away. I feared Z2 would awake and come down and spill beads and eat beads and knock things over so I was keen to finish or put away. With some thought, she then decided on a rainbow. However, she initially had trouble with putting one bead on the peg/spike beside the previous one without knocking that one over. This was getting less enjoyable by the second as she got frustrated. The fun started (well, not quite fun but at least quiet co-operation and no cross crankiness on either side) when we hit on the plan of her doing every second spike and me filling in the gaps. She did need me to tell her to come on, Z1 or we're putting this away, your brother will wake and ruin it some gentle encouragement to stay on track at times but together we did it. She was also getting a lot more dextrous at it by the end of the exercise so we may have improved her fine motor skills. She was pretty pleased with it too and showed it to my parents on Skype.
My favourite bit was when I suggested it could be a coaster for her dad's tea and she insisted that we test it with a cup before approving it for such use...and then took it back from him as she had really decided she liked it as a decoration on her play kitchen. Her dad (R) took it ok and got rather enthused when I suggested we could do one another day with Spiderman colours. It might be his turn to help that day.

If you want to get Pyssla-ed off too, the beads and shapes are in the toy section of IKEA. The shapes and beads were sold separately but came to under $10 (Canadian dollars, before tax)

Email ThisBlogThis!Share to TwitterShare to FacebookShare to Pinterest
Labels: background information, craft, not much fun really, turns out ok in the end, Z1