I know why they sell eggs by the dozen

It's not something I had really pondered before - why eggs come in dozens and half-dozens rather than any other number. 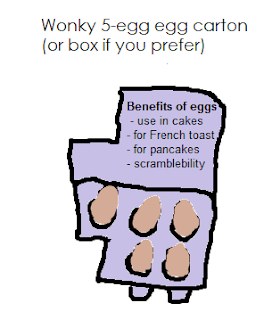 Thinking about it now, I suppose it could be that boxes of five would be awkward which is why ten wasn't chosen as the base number. However, I like to think the true reason was that somewhere, many years ago when such things were being decided, someone realised that one day I would want to make an Advent calendar with my Zeds and that two empty egg cartons that formerly housed a dozen eggs each would be perfect for this purpose.


I am still mentally refining the precise way in which our egg box Advent calendar will work but I am fairly confident it will be a thing of beauty. (I keep vacillating between "egg carton" and "egg box", sometimes feeling that "carton" is more North American and sometimes feeling that it's just the right name - thoughts?)

(Here's the real answer according to the internet. If I'd googled before writing, this post might never have existed.)
Posted by Madeleine at 09:12