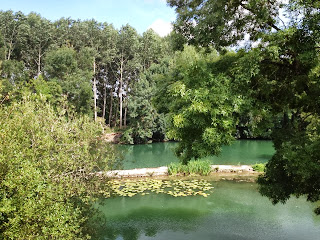 In the middle of August, me and the Zeds left work and school as usual one day and were driven by Husband to the airport. We took a 'plane to Paris, took a train to a town near our top-secret holiday hideaway and were collected by my venerable father and magnificent mother to be transported to the peaceful and green place in the picture. With multiple adults to watch the various children, warm sunshine, countryside and not much else, the pace of crafts here was considerably more relaxed than the 21 days of Christmas Conquering Crafts that started this blog.  In fact, though I was prepared to do more, we only really made a fairy house.


﻿ This was a scheme that I was rather more excited about than Z1 was. I thought we could do a stick collecting expedition as phase one with construction belonging to phase two but the phases merged. Z2 was good at stick-collecting but had to be persuaded to relinquish them as building materials as he likes to use them to fight bad guys.  The paint on the stones was from an outdoor painting project (painting sticks, in fact, using the stones as a palette for the paints) that Z1 did under my dad's supervision but they doubled up as good walls for the house.Interestingly, Z1 confirmed that she saw some items of fairy furniture, including a sofa made out of teeth, one morning when she checked the house. Unfortunately, I was unable to get a photo of this but it is, surely, a sign that the fairy house was most successful even if it didn't quite look like these . 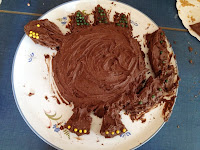