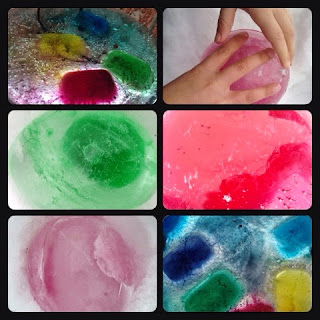 While those of you in the UK and Ireland and such places begin to notice the arrival of spring in February, I keep reminding myself that it was -11C for the St Patrick's Day parade here in Toronto last year and that our garden was still under a blanket of snow on March the 23rd, days - days I tell you - after the official start of spring. With all this in mind, on the 1st of March, I still decided that we had better do our ice sculptures before the temperatures started creeping above 0C as they were forecast to do.
It should be noted that we had quite severe splooshing of water this year. I hadn't forgotten but it's kind of tricky to avoid, I find.
We added some hanging decorations this year with ice gems made by freezing coloured ice cubes in advance before putting them in water to freeze. So now, feast your eyes! 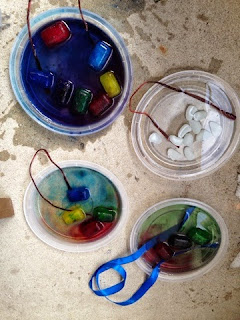 ﻿﻿
The temperature in Toronto did not go above freezing in February of this year - first time in 75 years, apparently, so there is a little meteorological fact for you.﻿﻿﻿﻿
﻿﻿﻿﻿﻿﻿﻿﻿﻿﻿﻿ 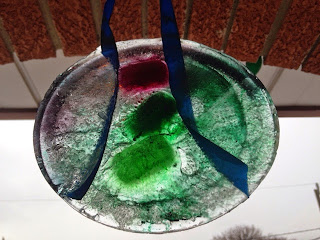 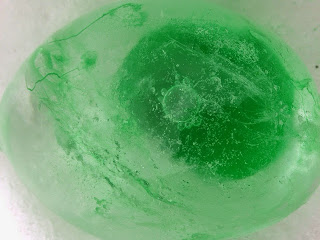 I had hoped for a shot with blue sky and morning sunshine streaming through but it was not to be.﻿﻿﻿﻿

Aren't they lovely, though (the Zeds, I mean)? Even if you can't see their faces in this one?!