I am coming back, I think


As the nights draw in and the temperatures drop and the Christmas decorations begin to appear, I find myself drawn back here.  Also, Z1 asked about making an Advent calendar this year so last year's sad story may have a happy ending this year. In the meantime, things have been made in the Conquering Crafts household since my  last post in April. The highlights are below. 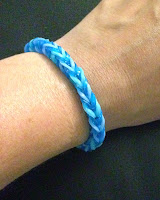 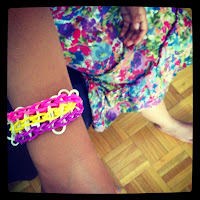 Like many a household across the world, there were many of these to be found in our house. And like many a parent across the world, some of them were made by me after the Zeds were in bed. And there may have been swearing at spillages and mistakes. Overall, a success, though.
﻿﻿﻿ 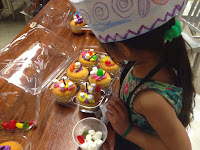 Then, there was a cupcake decorating party and Z2 got in on the action too. He is more of a fan of icing than he is of cake.


Z1 got a lovely sewing kit for her birthday which we cracked open during the summer. She is keen to make mittens now, I am considering some simpler project that she might be able to wear. Possibly a very simple skirt that she could sew decorations onto if I do the skirt. Hmmm.﻿﻿﻿﻿﻿﻿﻿﻿﻿﻿﻿﻿﻿ 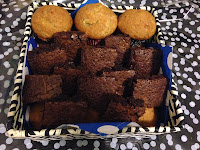 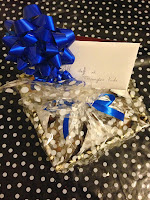 As Z2 is now a very big boy (as he will indignantly tell anyone who dares to say that he is a small boy), he left daycare in July. I was rather proud of the gift basket I made for the lovely staff there. I like dots. Oh yes I do. 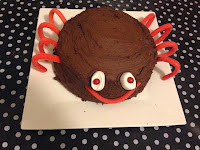 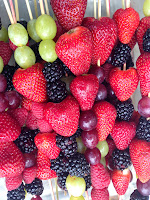 For Z2's birthday party, making fruit kebabs was a nice way to pass the morning without constant "what time will the party be?" questions. I have seen amazing efforts on Pinterest that look like rainbows but I think ours look pretty good too. I also successfully persuaded him to ask for a cake that would fit with my "Make an ordinary chocolate cake" plans. I rather like him. (The cake, that is, not Z2. He's a spider. Clearly. Again, the cake. Z2 is human.) 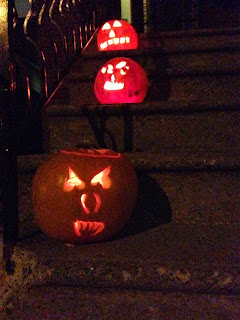 And before you know it, Hallowe'en was upon us again and we took to the pumpkins. Last year, Z2 made valiant efforts with the Dollarama tools while Z1 took the role of artistic director for her pumpkin. This year, I did buy better tools and amidst warnings about being very, very careful and frustration that it was still a tricky job,  we carved the beauties in the picture. Z1 was disappointed that hers didn't look better but it was all her own work (middle step). Z2 was artistic director for his (top step) and I was disappointed with the botched eyes on mine (bottom step). 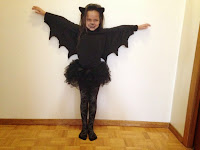 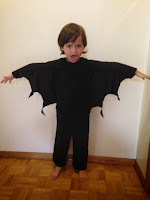 Disappointingly, from the point of view of photos and family records, Z1 decided that she wanted to be a bat again this year and Z2 followed her lead. I did make fresh costumes but used the same tops as last year so that saved some hassle. I followed the instructions here and used a measuring tape and everything to tailor-make them. On the great day itself, it rained. Again (3rd year in a row). Z1 didn't care and declined to cover her costume. Z2 put on his fleece and didn't really get to show off the costume at all but still got a great haul of crap to enjoy for weeks to come.
﻿﻿