Z1 will be 5 this month and we are having a birthday party for her. Husband and I are providing the entertainment. I will take charge of cake and Pizza Pizza will provide the pizza. A community centre will be providing the battleground party space.

I was less than dedicated unsuccessful in getting Z1 to make a list of who she wanted to invite in advance so we just invited everyone she could think of. We added any forgotten people from her class as we distributed the invitations to cubby holes. I printed out 30 invitations thinking we'd need a few spares. There were no spares. We have now invited thirty* children between the ages of four to six to a party, have undertaken to entertain them and have assured the parents they can drop them off rather than staying if they want. 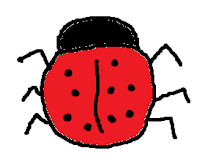 I have a plan for doing a beetley sort of craft. Considering the hiccups I sometimes encounter doing crafts with just Z1, this might be an overwhelming day. Preparation is key, though, and I have over 2 weeks to get ready at this point. I even invented a beetle-themed jumping about type game the other night so it can be a beetle-themed party. Goodness - maybe I'll even make a ladybird cake**.

You may also be interested to know: When on holiday in France with my family when I was about 16, we were staying in a small house in the middle of nowhere. One thing that happened on that holiday was that we saw a rather large stag beetle. I estimated it to be about 1 1/4 inch long, at the time. Exciting times.

*  We currently have 8 confirmed attendees and 1 "no"
**I suggested this to Z1 and she wasn't keen so I may be off the hook on that one.
Posted by Madeleine at 09:15