Not pancakes (but possibly even better)

Pancakes seemed like a good idea on a cold, snowy, February, nearly-pancake-Tuesday-anyway day. However, we had only a piddly amount of flour left. Very piddly - not much more than 50g. I hadn't checked before announcing the plan to Z1. (Clearly I did not learn my lesson from the not-gingerbread fiasco)  Things were looking grim.

I Googled "what can I make with 100g of flour" (in my wish for more flour than we had, I misread the scales) while Z1 stood disconsolately on the chair beside me, gazing at the flour that was not going to be a pancake in the bowl. She also kept putting her hand in it which I found somewhat irritating but flour does feel kind of silky. Google did not solve my problem. 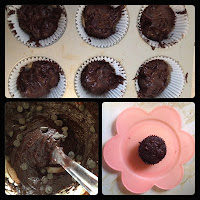 I turned to Pinterest, recalling a single serving chocolate chip cookie recipe but came across these three ingredient Nutella brownies before I found the cookie recipe. Only ten tablespoons of flour were required. With trepidation, I got my measuring spoons and spooned out my flour - just about enough. Hurrah! I told Z1 we would make brownies instead. It was all good. We'd even just bought a new jar of Nutella. It was then that pure wonderful began. I remembered we had a jar of non-Nutella, non-hazelnut chocolate spread. It was bought when I was alerted to the fact Nutella wasn't allowed in school 'cause of the nuts. It wasn't very nice and nobody ate it...until now.
The brownies began to smell very lovely in a short space of time and then we ate them warm from the oven with the chocolate chips still melty. Z1 gave them 58 marks out of 10. (I really must work on her grasp of numbers, fractions and rating scales.) They were also rather delicious, possibly even more so, after they had cooled. 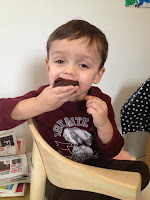 The satisfaction of using the jar of sweet brown not-Nutella and the tiny bit of flour is immense.


Credit where credit is due: My recipe can be downloaded from here but I adapted it from Schoochmaroo's recipe at Instructables here.
Posted by Madeleine at 06:36

Email ThisBlogThis!Share to TwitterShare to FacebookShare to Pinterest
Labels: edible, messy, move to plan B, Pinterest, turns out ok in the end, Z1