Being from Ireland, I grew up with Hallowe'en and its spooky excitement. The sound of children on the street in the dark going 'round the houses (or trick or treating, in more North American parlance) really thrilled me and made me nostalgic on our first Hallowe'en in our house in Dublin. We moved into this house in Toronto last Hallowe'en and it was so lovely to move in, then go out and about with the Zeds dressed up and then have all the children come to our door too. In fact, last year Z1 was more excited about giving out sweets to all our callers than she was about what she had got and even voluntarily started doling out some of hers when the stuff we had bought ran out...but I digress. Crafts, Hallowe'en and crafts. 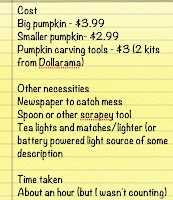 So, despite having grown up with Hallowe'en, we didn't carve a pumpkin every year. I think pumpkins are more a North American thing and they were expensive. Mum would usually carve a turnip but we didn't all get involved, or I didn't anyway, so last year was my first ever pumpkin carving and I really enjoyed it (I was expecting to hate it a bit, to be honest) so was rather looking forward to this year.

I set aside Saturday (27th October) as Pumpkin Day and Z1 and I went out in the miserable rain with the buggy to buy our pumpkins (I got two, knowing I would want one to do all by myself) having bought the carving tools earlier in the week. Z2 was napping. Bonus.

Z1 was very eager to get going so we covered the table in newspaper, rolled up our sleeves and set to work. The tools were great - very little danger of injury and did the job. I soon had lids cut out of both and we got scooping seeds and stringy goo out of the pumpkins. This didn't get too messy for us but I imagine if Z2 had been involved or Z1 had been in a more boisterous mood, it could have been very messy indeed. This was the bit I dreaded last year but didn't find bad at all and it was fine this year too. In fact, it was kind of fun to scoop and scrape and plop it into the bag (slight guilt for not roasting the seeds and saving the flesh for soup and so on but I got over it pretty quickly).

I suggested to Z1 that she draw the face on so she'd have a guide to carve around and the kits we'd picked up in Dollarama had a piercing tool to pierce around a template. However, we used washable markers and they didn't really stay on the pumpkin skin...which I am now choosing to call the pumpkin hide. Despite this, she remained happily involved drawing a nasty face onto her pumpkin while I merrily carved mine. She barely even talked much (for her...and she is usually talking all the time. All. The. Time.) and it was most pleasant. When the time came for her to carve, we found it was tough going for her, so she took on more of a director's role while I did the carving and, overall, it was a most satisfying hour or so. And here they are. I won't say which was my creation and which was Z1's but I will admit to being quite proud of mine.